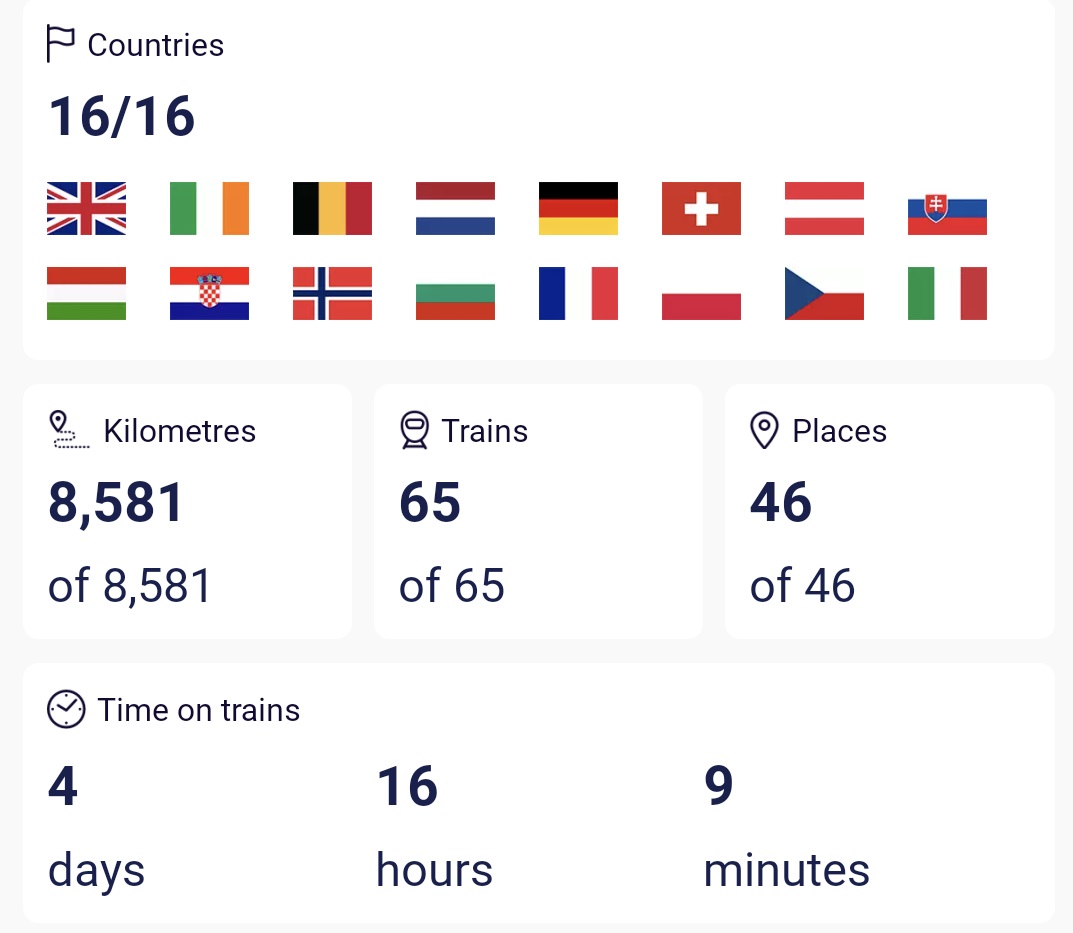 I’m writing this post from the airport in Istanbul–just a few miles from the Bosporus Strait that demarcates the border between Europe and Asia. After 118 days of travel, all in Europe except for a week in Tunisia, it’s time to see more of the rest of the world.

As we started this trip, our rough goal for a year was 3 months each in Europe, the Middle East & Africa, Asia, and South America. We kind of accidentally committed to almost 4 in Europe when we bought a 3 month Eurail pass: the price for 3 months over 2 was minimal and then we made plans without rail for a couple weeks before using the pass and a couple weeks after. The Eurail app, which has housed our tickets for this whole time gave me a helpful summary of where we’ve been with both stats and a map:

Anyway, those are the stats. Here are a few more reflections now that we’ve been traveling for almost a third of a year.

Which I’m embarassed to say while taking a sabbatical year, but it’s true. The greatest unplanned time suck has been planning our future travels, typically at least a couple of months in advance. Karen and I didn’t use to travel that way, but everything is more complicated now. It’s not really the fact that we have kids but rather that there are 5 of us. That leads to two big consequences:

Airbnbs are almost always better and cheaper. (At least in Europe! We’ll see about the rest of the world.) Our places have typically been fine and often great, but the market for Airbnbs gives you better places when you book earlier and better prices when you stay longer. We’ve been erring more on the side of 3-4 day instead of 1-2 day stays for the latter reason.

Transportation is expensive. I’ve been driving rental cars much more often than I expected for this reason. Last week, we paid $120 round trip for four of us to go three hours each way to Delphi from Athens. A rental car would have run us around $50, but we decided the stress of getting and returning a day rental on top of 6 hours of driving on windy roads made the extra cost worth it. When we do want to take taxis, our family typically requires two, which adds an extra level of stress when there’s always a chance the driver won’t understand where we’re going. In Sofia, Henry and I took a first taxi from the airport and Karen’s driver couldn’t figure out where to go. Luckily I was able to call her phone and have my driver talk to hers. If we instead try to get a “big taxi”, that’s often luxury priced. For this reason, one of our biggest expenses in Tunisia was the van I hired to drive us to and from El Kef from Tunisia.

Besides planning time, we’ve also found the need to pause both for general rest days and to give the boys time to do schoolwork, which also needs to be planned. I’d say we’re still trying to find the balance of how to incorporate enough rest time in our schedule while not feeling like we’re missing an opportunity to see and experience things. “We didn’t come all the way to Athens just to sit in our apartment”, is definitely something I’ve said.

Finally, to navel gaze a bit, I thought I’d have more time to blog, writing a post every week. That clearly isn’t working, so for the rest of the trip, I’ll probably continue to rely on Instagram to capture quick thoughts for every country and probably do fewer of the very long posts than I was able to make up through Switzerland.

I’m mostly pointing out challenges above, and it’s true that a lot of hard work goes into this trip. I should make it explicit, though, that we’re having a great time. So far the standout locations for most of the family have been Bulgaria, Greece, Berlin, and Estonia. Almost everywhere else has been solid too, although Karen has gotten sick all three times she’s visited Italy and has let me know I’ll be going without her if I ever want to go again. (The kids have been instructed that if they get married in Italy, their mother will not attend.)

Besides a goal of teaching the kids just how big the world is, we also planned on this trip to get more time together as a family. The original idea was pre-COVID, which gave most families too much time together, but I’m happy to say we still like each other and have (obviously) been able to enjoy that extra time. It might be hardest on our teenager, but he finds respite by ducking his nose into books whenever he gets a chance.

After we were hiking in Scotland, Google Photos helpfully sent this reminder of the many years of silly pictures I’ve been taking with Henry. This is joyous and silly, but Google as a whole makes this entire trip so much easier than it would have been during our seminal backpacker days at the turn of the century. It’s almost hard to enumerate the many ways in which this is true, but I’m going to try in this post.

I’m sure there’s much more I could say, but we’re got to get going to our flight to Nairobi soon. One quick shoutout to the Chase Sapphire Reserve credit card, though. It has an enormous $550 annual fee, but they reimburse $300 of that on travel purchases (which we obviously have!) and then give you points for other travel purchases that amount to about 6% back on every travel expense. For us, though, the best part right now is it comes with lounge access at hundreds of airports around the world:

I’ll end with our travel stats as we leave Europe:

One (Christmas) Night in Bangkok! James is a bit o

I finally got around to writing about our experien

Read more about how we met and got into traveling with our three kids.