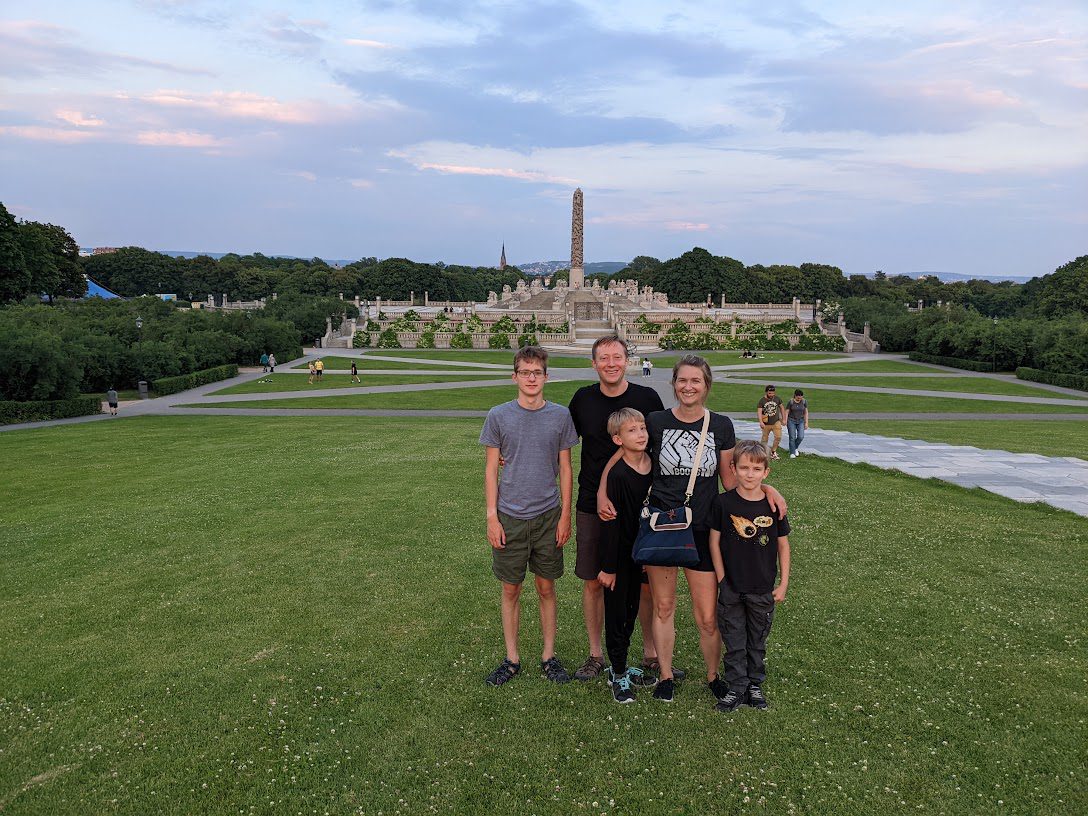 Norway is well-known for incredible natural beauty, and after 9 days here, we can definitely testify to that. We’ve also found it to be an incredibly welcoming place, although our first day didn’t start that way for us.

We began a couple hundred miles north of the Arctic Circle in the university town of Tromsø. After a long trip including a 6-hour layover in Oslo, the airline lost James’s bag, and the guy at the Hertz counter was just missing for 30 minutes when I arrived tired to get the car. We then had bad GPS instructions into town, and as we were buying groceries for a 10pm spaghetti dinner cooked from our farmhouse Airbnb, I was told that beer sales after 8pm aren’t allowed in Norway. It was a long day that Henry says we should promise to never talk about again. (Sorry, Henry.) As a palate cleanser, here’s Henry chasing a pigeon:

I realized later that they were really serious about the no drinking thing because Sunday morning at 10am, the police were pulling over every driver crossing the main bridge and making them do a breathalyzer test to check for sobriety. The legal blood alcohol maximum here of 0.02% is one fourth the limit of Illinois. As a palate cleanser to that story, here’s me having a $20 beer.

As I’ve shared before, we primarily came to Tromsø so I could run in the northernmost land race in the world, the Midnight Sun Marathon. I had a few leg issues in the runup to the race, so downgraded from the full race to the half marathon, but it went really well, and I ran one of my fastest halves at 1 hr 52 min! (Since most races are in the morning, I probably won’t switch to the pre-race beer as a normal strategy. It was a nice birthday treat, though!) Charlie also had a great time running the 4.2K “minimarathon”, finishing in 27:55, and now wants to find races to run during the rest of our trip. (“Running is fun!”)

Besides the race, Tromsø is a cool place, with the northernmost university in the world, and is the 3rd biggest city north of the Arctic Circle behind Murmansk and Norilsk in Russia. Highlights for the boys were the “Polaria” museum, with great underwater views of seals in their aquarium and the little Troll Museum, with beautiful art and interesting stories of Norwegian mythology and folklore.

After Tromsø, we caught an early flight through Oslo to the west coast city of Bergen, which used to be one of the most important trading cities in Europe, home of the old Norwegian capital and a big outpost of the German Hanseatic trading league.

More importantly to us, it is also currently home to Karen’s cousin Jörg, his wife Jeanette, and their daughter Jule, and they were kind enough to host us for our 3 nights in their huge home 30 minutes outside of the city. After Jörg met us at the airport and showed us around town on a rare sunny day, we had a huge barbecue feast at their home, and the boys were delighted to stay in separate rooms for the first time during our trip. Thanks, Jörg and Jeanette!

In addition to the hospitality, the highlights for us were probably the excellent Museum of Natural History, and (for me and Karen) a walk from the house to the local beach.

After our last day in Bergen, Jörg dropped us off downtown to catch an early boat/fjord cruise to the town of Flåm. As we explained to the boys, fjords are long, deep, narrow valleys carved by glaciers and full of water, and western Norway is chock full of them. In fact, they cover most of the coastline, with over 1,000 along the country’s coast. As we sailed our 5.5 hours from Bergen, we went through the “King of Fjords” or Sognefjord and mostly took a bunch of pictures.

After the cruise, ending through Aurlandsfjord, we arrived in the early afternoon in Flåm. We were a little tired from an earlier start, but after some nice pastries, thought we could try the “easy” “1-hour” hike to a waterfall on the map provided by the tourist office. My use of quotes there should let you know that neither of those facts were true.

It started out quite easy, almost perfect on a pleasant and sunny afternoon. When we saw the sign up the hill for the waterfall, Henry elected not to join us, but we assumed we’d be up and back 15 minutes later. We of course returned over an hour later after at least 1,000 steps that took us halfway up the mountain. We did, however, get this view out of it:

Afterwards, Karen and I had a relaxing drink in the local beergarden while the boys played screens in the hostel room. After a taco dinner, we relaxed for a bit by the water during the low-key local Midsommer celebration, which included a bondfire and people eating cake.

The next morning began with a 6.5 hour train journey to Oslo. The first hour was the special “Flåmsbana” train, the steepest standard train in Northern Europe, with 20 tunnels and a ridiculous number of scenic valley and waterfall views.

After that, we did the last 5+ hours in a normal train and kicked off two things: our 3-month Eurail pass, providing unlimited train travel in Europe until late September, along with school! I gave the boys assignments in history, math, English, and Spanish. (The latter will mostly be Duolingo until we do language classes in South America towards the end of the trip.) They grumbled a little, but mostly liked it.

When we arrived in Oslo, we checked into our Airbnb, watched an episode of Obi-Wan on Disney+ (I have a Chromecast that we just plug into any non-ancient TV) and then headed off to meet my friends Kjersti and Shahbaz for another Barbecue! I met Kjersti in Prague more than 23 years ago while backpacking through Europe after college, and she invited me to stay at her place in Oslo when I visited a few weeks later. While there, I also met her boyfriend Shahbaz, who took me rollerblading around the city. (It turns out that was one of the last times for both of us!)

We’ve stayed in touch via Facebook and it was fun to catch up now with families, including their two daughters. It was Charlie’s birthday, so in addition to prepping an awesome dinner, Kjersti made a cake. Thanks, Kjersti!

For our final day in Oslo, it was hot, so we’d planned to catch a ferry to a local island and hang out at the beach with a picnic lunch. It was a Saturday and everyone else had the same idea, though, so we instead relaxed from a city beach, without the ferry with its one-hour wait. Still nice. Afterwards, we found some swings and the local castle before heading home and putting the kids to bed.

That was supposed to be the end of the day, but we’d missed one of my favorite sites from my 23-year-ago trip, The Vigeland Park, with the fascinating and often bizarre sculptures of Gustav Vigeland. Karen and I were planning to make the 20-minute walk over in the morning before catching our flight, but we were worried about predicted rain and potential airport delays, so instead yanked the kids out of bed for a surprise “bonus” visit.

The 10 pm Norwegian summer sun made for some awesome colors and the late hour also made it fun for both me and the kids. I’m lucky to have such a fun and spontaneous wife who came up with the idea to blow-up bedtime for the opportunity. Here are some of the pictures:

So that wraps up Norway! With this visit (pre-Ireland, where we are now), our counts are as follows: 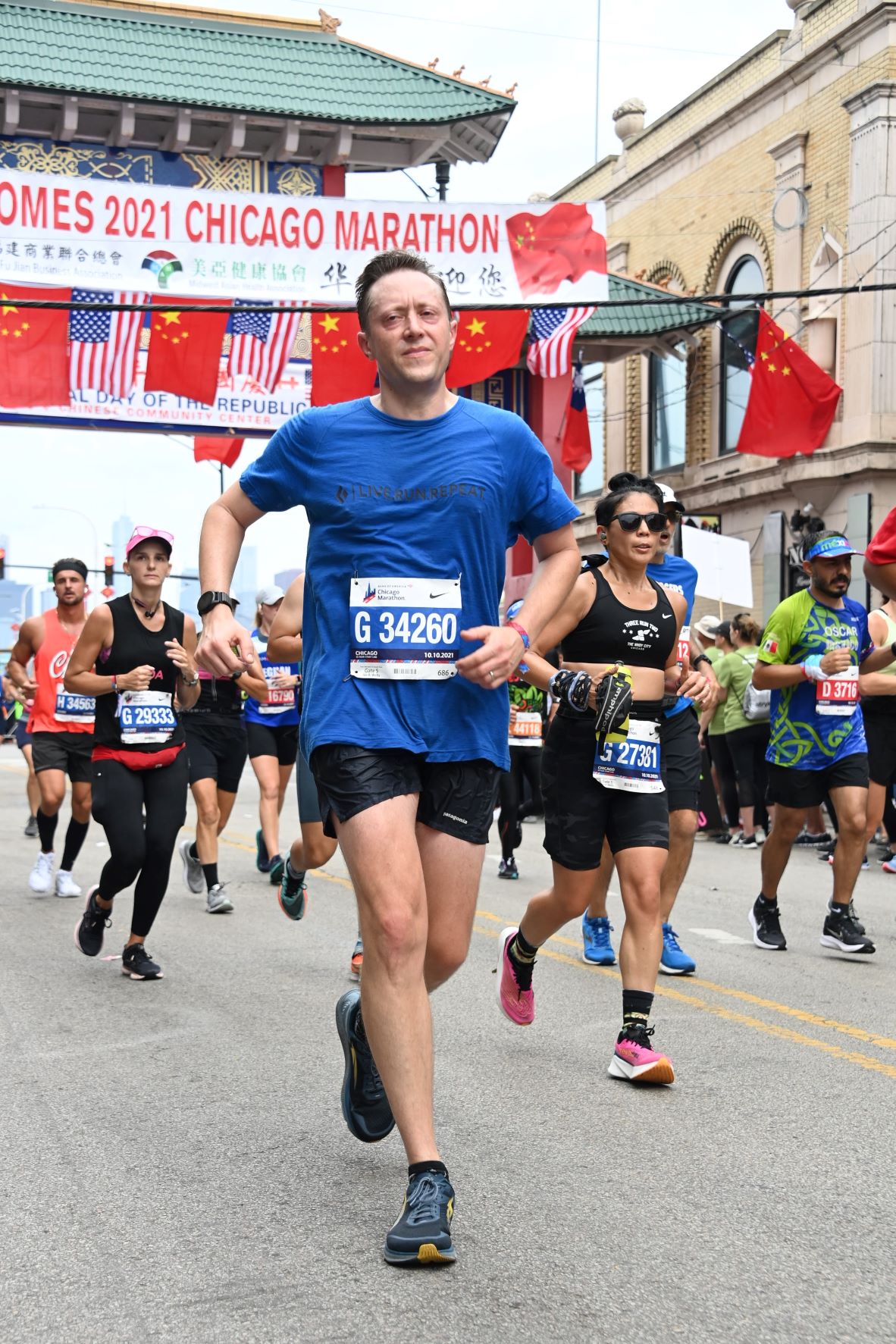 I wasn’t sure if I’d ever run a marathon. It’s something I toyed with briefly in my late 20s, but shin splints and long hours of work quickly put it out of my mind.

That was until I turned 40 and decided to do a half marathon to mark the occasion. Here I am finishing that race in Maine in 2016:

I did one every year after that and was about to run my annual half for 2020 in Oakland, California when the pandemic hit. Realizing we’d have to postpone our trip around the world, as a consolation I decided to run my first marathon in the fall. The regimen and repetition of the training was a comfort to me for those middle months of the year as the pandemic stretched on.

Of course, unfortunately no marathons were held that fall, so I just made one up to run by myself. Karen dropped me off at a park in Indiana and I ran the 26.2 miles home. I picked the same day that the Chicago Marathon would have run in October for my “Chicago Marathon” and ran past 5 of Noble’s schools, so someone from our sports team followed me and made this cool video to commemorate the event. (Thanks, Anna!)

In 2021, I finally ran the real Chicago Marathon:

Even though I look in pain there, my training was good and I felt fine a couple of days later. Good enough that I thought I ought to squeeze one more big race in before we start traveling for a year this summer. I’d been eyeing the beginning of April in St. Louis over the boys’ spring break, but had to look for something else when we changed plans for that weekend.

Then, I got an email about $500 flights to Rome. We haven’t been on a plane since Jan 2020. But…in my search for marathons to replace the St. Louis one, I’d briefly noticed that the big one in Rome was on March 27. I’d assumed it was out of the question. Maybe not? (Obviously not.)

So, Karen and I are going to Rome for 4 days while my brother Paul and his wife Özlem come and watch the boys. It’s kind of a crazy thing to do, but crazy like we’re used to doing. It feels good after this long pandemic, which we’re hoping will stay manageable.

To make things even crazier, we’d already noted a cool opportunity at the beginning of our “big, big trip”. We’re starting off in Stockholm on June 10 and realized that on my next birthday, 8 days later, there was going to be the “Midnight Sun Marathon” north of the Arctic Circle in Tromsø, Norway. It starts at 8:30pm and even though I’ll finish after midnight, I’ll have daylight the whole time. Since all of the training will happen before we go, it somehow works. More of the good kind of crazy. Charlie and Karen are planning to run the shorter race there too.

So, even though I’ve never really been a marathon runner, that’s how I’m going to end up doing 3 of them over the course of 10 months. I’m excited for how memorable the races I’m running are meant to be. In fact, this article puts all 3 on a list of the 23 “World’s best marathons in 2022”. I won’t really have time to train after Tromsø, but can’t help but think how fortunate I am to get to do all of this.