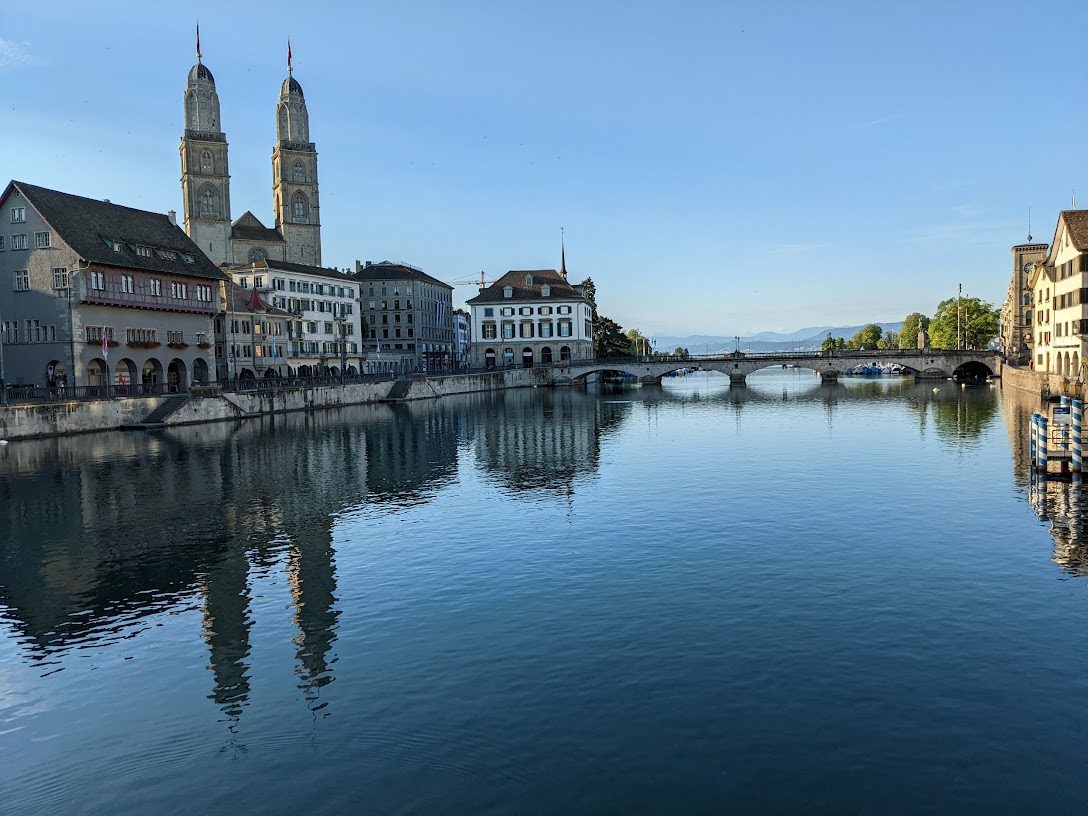 If you had the choice to live anywhere in the world, where would it be? Karen and I love Chicago and it continues to be our pick for our home country. We’ve also lived in Melbourne, Australia, and it frequently rates at or near the top of this list by the Economist Intelligence Unit of the world’s most liveable cities.

Another city always near the top is Zurich, Switzerland. As we were planning this part of our trip, all of Switzerland was going to be via our rail pass while staying 15 minutes across the border in France: we couldn’t afford the price of the Airbnbs and hotels there. (The country is expensive for non-residents, but locals receive a lot of services for the high taxes they pay, so it’s easier to live in Switzerland than to visit.)

My friend Dom, though, lives in Zurich and is absolutely passionate about his hometown. We were hoping to meet up for dinner, but when he and I realized that his family were going to be on vacation when we passed through, they very generously offered to let us stay in their central Zurich apartment while they were away. He also made it his mission to ensure we left loving his city as well. As you’ll see, he was definitely successful!

Travel to Zurich and our first day

In order to make our way from Betzdorf to Zurich, we had to catch an early train to Cologne, then another along the Rhine to Basel (where we were originally going to stay on the French side of the border) and then finally onward to Zurich.

It was a long-ish day, but we were looking forward to getting to Dom’s place by 5pm or so. However, that didn’t happen: right at the end of our second train, we discovered that the bathroom locks stick. Charlie learned this by getting locked inside a few minutes before we were due to exit at Basel before the train continued on in the wrong direction. Frantically, I tracked down a conductor, harrassed her to rush to our rescue by unlocking the door with a special key, and then rushed the whole family off the train just as we reached the Basel stop. Whew, crisis averted!

Except, of course, in my haste I failed to realize that we got out at the “Basel France” stop and not the “Basel Switzerland” stop that was coming 5 minutes later–the one with our connecting train. Luckily there were another couple of trains we were able to take, but that little slip left us almost two hours later in arriving to Zurich than planned. (Ironically, Basel, France was where we’d initially planned to stay prior to learning of Dom’s offer.)

Otherwise, things were great! We were able to follow Dom’s instructions to get into the apartment, I bought a bunch of groceries (Dom also advised us to skip the expensive restaurants and cook for ourselves), and even had time to finish reading Harry Potter 5 to James before bedtime:

The next day’s highlights were (for me) my morning run along Lake Zurich and then swimming in the lake after a short walk from Dom’s apartment:

Walking around this beautiful town

For our second day, we did a walking tour, again thanks to Dom, who sent this wonderfully detailed set of instructions. I’m adding it all here in case anyone else who reads this happens to be visiting Zurich and wants to follow it (which I’d recommend!)

Recommended tour from my apartment: head west toward the lake, stroll north along the lake shore to the opera house, cross Sechseläutenplatz,

grab a cup of coffee to go at Vicafe, continue north and head into the old town (make sure to take Oberdorfstrasse), walk all the way to Mühlegasse, then cross over Rudolf Brun Bridge (Option: continue until Central Square and then take the Poly-Bahn up to the terrace of the ETH main building, from which there’s a great view over the city; there are also stairs),

I’m not sure if all of these pictures were from before or after the Heimatwerk store (we skipped the souvenirs), but we did climb up some steps!

go down on the other side and continue to Münsterhof, head west to Paradeplatz, go to the Sprüngli store and buy some overpriced macarons, walk south along Bahnhofstrasse toward Bürkliplatz (optional: buy a snack at John Baker’s),

At this point, the boys were hot so we opted for soda/beer over macarons, although Dom was disappointed in how overpriced and touristy our choice of venue was:

from Bürkliplatz take the boat to Zürichhorn or Wollishofen (depending on mood; if you do go to Wollishofen, have a snack or a drink at Rote Fabrik) and end the day at Badi Tiefenbrunnen or Badi Mythenquai.

We started the walk planning to go swimming as described here (at the “badis” or swimming areas with facilities along the coast), but everyone prefered to relax at the end of the day, so we stayed in for the night, watching our second of three movies. We did catch some fireworks for Swiss National Day from the balcony, though!

Some gardens and a view

For our last full day in Zurich, we visited two great sites. First, the botanical gardens, run by the University of Zurich, which Charlie is now very curious about attending. Here are some photos, sans captions:

For the second half of the day, we took a couple of buses up to the “tall hill” of Uetliberg which overlooks the whole city. It was a beautiful view, but when I suggested we hike the way down, I don’t think I realized just how steep it was. Let’s just say that everyone was happy to make it down and we survived with only a few frayed nerves and just one bruised tailbone:

So that was Zurich! Like I said, we loved it and Charlie plans to investigate college options in the future. We’re very greatful to Dom and his family for being great hosts in absentia and for providing us with such a great list of suggestions for what to do.

I can’t end, though, without showing a few pictures of our view from the train as we left Zurich and continued on to Innsbruck, Austria. Simply stunning. (The last picture is less about the view and more to capture evidence of our crossing through the tiny country of Liechtenstein. We usually only count a country if we actually spend time there, but it’s so small that we figure this makes the list.)

With that little bit of a cheat, here’s our country count up to this point: