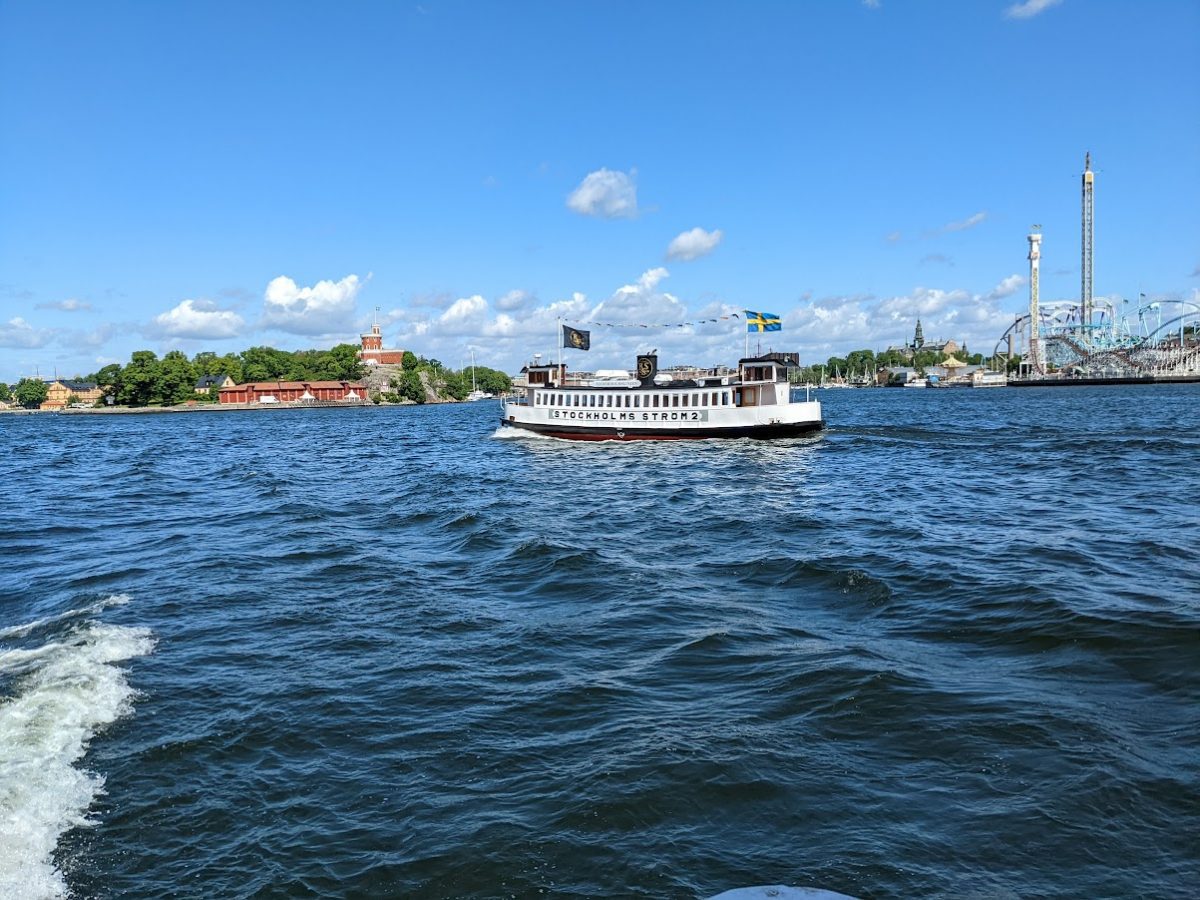 We finally started our trip around the world! We began in Stockholm, Sweden, because we had flight credits from our aborted trip two years ago and that was the cheapest destination we could get to on Lufthansa. Karen and I had both already been to Stockholm, but we were excited to be able to take the boys. We’ve had a great first week visiting Sweden, Estonia, and Finland, and are now traveling to Norway.

As my post title suggests, boats were a big theme for the first week, starting with our home for the first three nights, a late 1800s sailing ship named the Af Chapman. It’s docked on a quiet island in the middle of Stockholm and our “family cabin” for this converted hostel had five bunks at the very stern of the ship.

In fact, the entire city of Stockholm is a bunch of islands grouped together, so we had to cross so, so many bridges anytime we wanted to walk anywhere. And we walked everywhere. As we left our hostel for the last time on the way to our ferry to Tallinn, Henry said, “finally, our last time on this bridge!”

On our first full day, our first tourist stop was, you guessed it, a boat. We went to see the incredible Vasa, which was the most powerful warship in the world, boasting 64 cannons, when it launched in 1628. It only maintained that status for about 20 minutes, though, because while trying to keep it fast for the demands of an unreasonable king, they built it too narrow, and it tipped and sunk after the first strong winds of its maiden voyage, right in the Stockholm harbor. There it lay for 333 years, an embarrassment so great that the king had the masts cut down, because the harbor was shallow enough that they originally kept sticking up after the sinking.

The boat was rediscovered–incredibly well-preserved by the mud and salt water–in 1956, and was carefully raised to eventually be displayed in the museum we visited. The museum, of course, had a whole section about how this happened, but Karen and I were almost equally impressed with the little Swedish girl who explained this to us.

Puckish, maybe 9-10 years old, and sporting a quarter-shaven head, mohawk, and a fur sweater we think she may have trapped, skinned, and constructed herself, she appeared–seemingly with no parents–and started explaining everything to us in perfect English. The English part isn’t all that unusual for children all across Scandanavia, who often start in early elementary, but we’ve been speculating about this child’s entire backstory. Did her parents buy a membership and just drop her off there every weekend morning so she can live her best medieval life and pretend to be a tour guide? Rather than being dropped off, does she simply sail there on the boat she constructed by herself? Alas, she skittered away when Karen complimented her, so we may never know, but we have evidence of at least one super cool child in Sweden.

Next, we stayed on the same island and visited the Skansen open-air museum: a very cool place with a zoo and a bunch of historically accurate buildings with actors who populated the buildings in authentic clothes and were there to answer questions about their historic roles. Charlie, who recently realized he loves Monty Python and the Holy Grail, decided instead to ask everyone he sees, “what’s the airspeed velocity of an unladen swallow?” Almost everyone answered with a reference to the movie (“do you mean an African or European sparrow?”) and when he asked one woman why they knew, she said, “of course, we are European, Monty Python is part of our heritage.” The kids are suddently very curious about Eurovision as well.

The best part of Skansen, though, was that we happened to stumble into an annual event that was started with the wedding of Crown Princess Victoria in 2010. Once a year, they host a “drop-in wedding” day, where couples can just show up with a “certificate of no impediment” (which proves they’re not related) and $150 and do a casual no-planning-required wedding with their friends and family. They do hundreds a year (this was the first year back after 2020 and 2021 pauses for the pandemic) and we saw dozens of happy couples as we toured the park.

Our next day revolved around yet another ferry, this time about 45 minutes away to visit the idyllic island of Vaxholm.

Our final day in Sweden, we did a tour of the opulent royal palace and walked the old city, Gamla Stan, before catching an overnight ferry for Tallinn, Estonia.

Karen fell in love with Tallinn 18 years ago while visiting with her mother and sister, so made a point of adding it to our plans to make sure the boys and I could experience it too. I’m very glad she did. In addition to the charming old city that survived the world wars, it was walkable, and by far the cheapest city we plan to visit in this Scandanavian leg, which has otherwise been a budget buster.

Also, we had a nice Airbnb where the owners, Jevgeni and Katti, went out of their way to help us out. When he heard our dismay that the apartment didn’t have a washing machine like we thought, he volunteered to pickup our clothes and have Katti wash them, free of charge. He then made two additional trips to drop off the clothes because a couple of items were accidentally left out. I’m going to just assume all Estonians are as nice as them, because they were total lifesavers.

After a couple of days in Estonia, we reprised our boat theme and took yet another ferry to Helsinki, Finland. (This time only a couple of hours instead of overnight.)

From one ferry to another: as soon as we arrived, we tossed our bags in a locker and took a tram to another local ferry to see the UNESCO World Heritage island fortress of Suomenlinna, which was a delightful place to pass a couple of hours before going on a “free walking tour”. This is a thing that we also did in Tallinn–you join with no upfront commitment, but “pay what you like” at the end assuming the guide was good. Ed, an Irish transplant who moved from Spain to be with his Finnish Kindergarten teacher girlfriend was excellent.

As my class at UChicago would recognize, Finland is actually kind of a famous country for good educational outcomes, and after Ed mentioned some aspects of their approach I chatted with him a little between stops about teacher recruitment policy. I’m hoping I didn’t cause other folks to think he was too boring for the money!

We finished off the day with the boys staying in our Airbnb while Karen and I went to grab dinner like adults by ourselves. I had reindeer meat, which is a little tough but a nice novelty. The boys didn’t complain, though, because (1) they got to play games while we were gone and (2) we found a Taco Bell and brought it back to the apartment. My kids are classy.

Which they obviously get from me, because I went and grabbed McDonalds for breakfast this morning. This allowed me to increase my count of countries I’ve eaten McDonalds in to 28 total. (It’s often a quick place to eat and be sure the food is illness free while also taking advantage of good bathrooms.)

At the end of our first week, that brings our lifetime countries visited count (prior to Norway) to the following: