I’ll get back to our actual travels in my next post, but I wanted to share some details about our stuff. In addition to the questions about leaving home that I addressed in this note, I’ve had a lot of people ask what one packs for a one-year trip.

As you can see in this picture, the basic idea is everyone gets a backpack that has all of the clothes and everything else you need to bring for an entire year. Henry, Karen, and I also have smaller backpacks that work as daypacks when we’re not traveling and otherwise act as places to store expensive, fragile, or important stuff. (I’ve got 9 passports in mine because everyone else is a dual US/German citizen. I did, however, get to go with them in the “EU Citizens” line when we landed in Frankfurt and it was super nice.)

The backpacks are pretty big, but small enough for airplanes. Mine weighs 44 pounds, Karen’s 37 lbs, Henry’s 26 lbs, Charlie’s 22 lbs, and James’s 15 lbs. (James says it feels like a heavy-ish school backpack.) The waist strap loads most of the weight on the hips, so it’s not awful to walk 20 minutes in these, but more than a mile or so and the boys get annoyed with us.

In terms of what goes inside, you basically pack the same thing for a one-year trip as you do a one-week one. I’ve got 7 t-shirts, 7 pairs of socks & underwear, 3 pairs of pants, 3 pairs of shorts, 2 hoodies, running clothes, a pair of sandals, and swim trunks. I also have a backup pair of shoes because Karen and I learned in a prior trip to Asia that it’s really hard to find size 13 shoes in most parts of the world. (We’d have to pack more clothes if we were going to colder places, but are planning our destinations to avoid that!) Every few days, our Airbnb then looks like this:

Speaking of the old backpacking trips Karen and I used to do, we love to read and would often start a trip with maybe 10 books each weighing down our packs. As we traveled, we’d exchange, donate, or leave behind the ones we’d already read, making space for souvenirs or anything else we wanted to buy.

Our kids read even more than we do, but luckily we don’t need to worry about books adding to that weight total above:

Because they read so much, we also subscribe to Kindle Unlimited, which lets us check out 10 books at a time for $9.99/month. I mostly don’t like the books that are available with this plan (except for this one!), but Henry and Charlie find plenty and frequently go through several books a day.

I say mostly above, because there’s a huge and awesome exception. When we travel, we prefer to use Lonely Planet guidebooks to plan our trips and every single book in their catalogue is part of it. Right before we flew from Finland to Norway, I just returned the Finland guide and downloaded the Norway one.

Speaking of technology, that’s most of what goes into the smaller backpacks. Our family travels with 5 laptops, 5 phones, 5 Kindles, 3 Nintendo Switches, and 2 tablets. With all of that technology, this is what it looks like when we have to charge everything. These little things, from Epicka and Zendure, are awesome because the have travel plug converters built in and can charge 6 thing each at a time.

Finally, on phones, we’ve been really happy so far with how Google Fi has worked for us. It’s unlimited data and texting in most countries in the world for $45/phone. We have that for me, Karen, and Henry, and it also lets us turn our phones into hotspots so we can get internet on all of the other devices. (Calls are $0.20/minute, which is reasonable, but why we prefer calling people on WhatsApp, which is free.) For Charlie and James, they use old phones that Karen and I used to use, without cell service, but they work on wifi and they have phone numbers that I got from Google Voice that they can still use for texting friends. (In James’s case, his friend’s parent.)

Anyway, that’s my quick-ish rundown. If you have any other questions, please drop it in the comments! 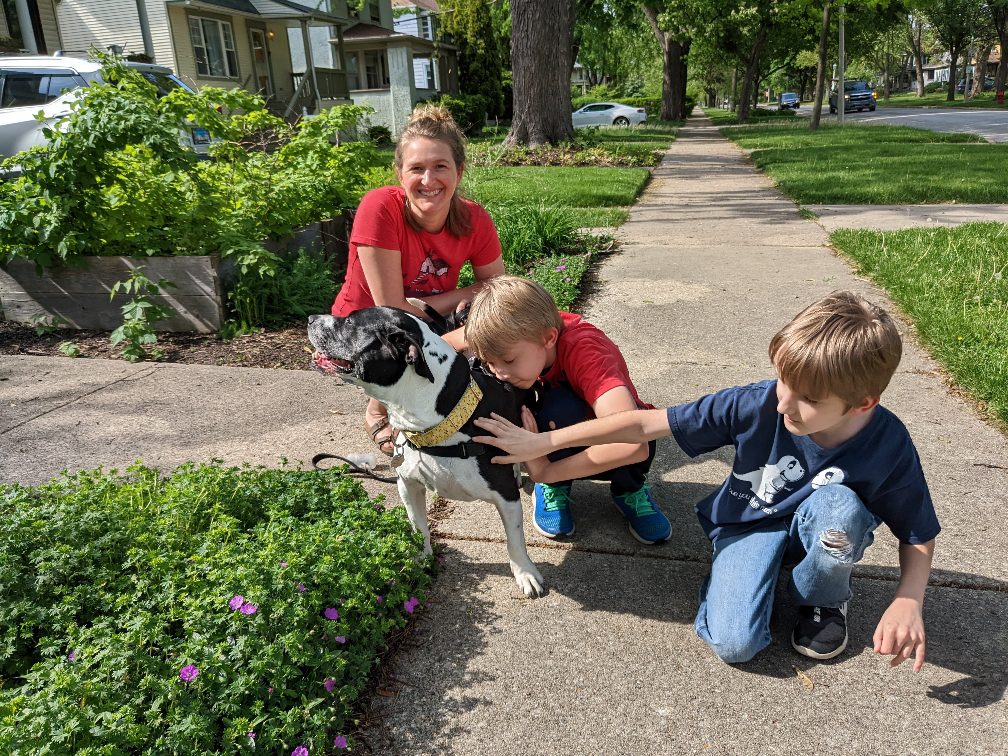 We’re leaving for a year! Finally, after over a dozen years of planning! It’s exciting! Right?

Well, of course it is. It is now, at least, now that I’m writing this from Stockholm, a couple of days into our trip. The last couple of months, though, were really stressful. When you’re a family of five living in a community for 18 years, there are a lot of ties you need to cut and/or preserve. That’s not to mention planning for the actual trip. Here’s a rundown of some of the biggest things we’ve been focused on for the past few months.

The House and our stuff

We’re coming back to our house at the end of our trip, so are renting it out while we travel. The renting part is pretty straightforward because we’re paying a management company to find the renter and manage everything while we’re away. It’s still stressful, though, because we hadn’t found a renter by the time we left, so Karen is still texting the agent from Stockholm about the latest, although we know it will get rented eventually. At least the showings are now easier since we’re no longer trying to live in the house.

And those showings were just a small part of the hassle of the house the last couple of months. Mostly, it was Karen’s constant task to pack everything up progressively and put most of our stuff into the crawl space in the back of the house. (A few weeks ago, when she took down all the wall hangings, James indignantly asked, “are we just going to have to live in a boring house for the next 10 days?!”) She fit almost everything into the 10′ x 12′ x 4′ space with an astonishing feat of three dimensional packing. For what didn’t fit there, we rented a small UHaul and moved to my parent’s basement a couple weeks before we left. (Thanks, Mom and Dad!)

We also had to leave our pets: the five chickens we’ve had since the start of the pandemic (donated to a local woman who was excited to get started with grownup hens) and the foster dog, Shelby, we’ve had for the last 6 months.

It’s no exagerration to say that I gave 10 years notice that I was leaving my job. During my interviews, when asked how long I’d stay if hired, I said I was leaving, for this trip, in the summer of 2020. I then continued to remind my managers of the not-so-imminent impending departure every year. So, luckily the transition was several years in the making, especially with the extra couple of years the pandemic added to our well laid plans.

In fact, we’ve been planning the trip for 14 years now. It was Karen’s idea when Henry was a baby, so among other things, we’ve been saving up for most of that time in order to spend over a year on the move without any income.

That’s probably the biggest positive of our pandemic delay–the chance to save up a little more funds and consequently spend a little more time than originally planned in more expensive places like Europe. We’re definitely on a budget, though, and were delighted to learn that we could get 3 months of unlimited train travel for the whole family for $3,300. Our accomodation, mostly Airbnbs, are all at least $100-150/night, so our budget is definitely looking forward to the second half of the trip where we’ll be staying in more inexpensive places in Asia and South America.

One big reason we’d planned the trip for 2020 was to time it to be Henry’s 7th grade year. We figured most kids would appreciate missing the middle year of middle school, and the academics aren’t so rigorous that we were overly concerned. Of course, now with the delay, Karen and I will be his 9th grade instructors and Henry very much wants to keep up academically with his friends.

Thankfully, his high school, Oak Park River Forest, has been incredibly helpful. When I reached out to the department heads for each of the subjects he was scheduled to take, all of them shared plans for what they’re covering so we can give Henry comparable lessons. The math department did even better and set him up as a student in their online class so he can do the exact same Advanced Algebra as his peers.

In terms of the actual “school year” and “school day”, we haven’t exactly figured that out yet, but are hoping we can do a lot of the work during the aforementioned train times. Charlie and James will be doing 6th and 3rd grade, but the standards they’re supposed to learn are pretty straightforward with lots of online resources.

And, of course, none of that even gets to the fact that we have to plan the actual one-year trip too. The rough plan, which will likely change some, is to spend about 3 months in Europe, 3 months in the Middle East and Africa, 4 months in Asia/Oceania, and 3 months in South and Central America.

We’ll mostly try to do most of the planning 1-2 weeks in advance, but because we’re starting during the high travel season in Europe in the summer, we’ve been trying to plan out our hotels/Airbnbs and trains/airplanes for that first 3 months ahead of time. So far, we’ve got 23 hotels/Airbnbs booked and about as many trains, planes, and rental cars planned out. (We’re planned through mid-August as of now.)

So, to summarize, it’s been a lot of things to think about! We’ve had a great last few days in Stockholm, though, and are grateful to final have this opportunity!